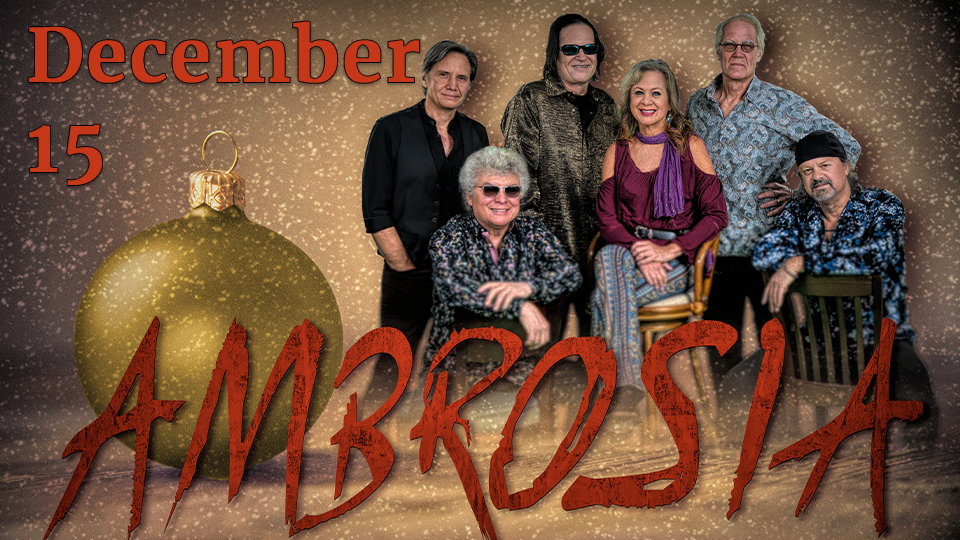 Ambrosia, the band known and loved by a multitude of fans since the 1970’s, is now more alive and compelling than ever. This 5-time Grammy Nominated ensemble is exploring new musical territory and bringing an exceptional musical performance to stages everywhere.

In 1970, four young musicians from the South Bay of Los Angeles, came together to create a new moving and invigorating style of music. Joseph Puerta, Christopher North, David Pack, and Burleigh Drummond produced a sound that was immediately recognized. Today, Ambrosia is three of the original members with the addition of guitarist Doug Jackson, contributing keyboardist Mary Harris, and powerful lead vocals of Kipp Lennon (from the band Venice).

Always exploring the possibilities of progressive, classical, and world influences – with tangled roots of soul, rhythm, and blues – Ambrosia is continuing to entertain their original fans while still engaging newer audiences.

During Ambrosia’s early recording history they garnered 5 Grammy Nominations, received frequent radio airplay, and gained the admiration and respect of the musical community – in addition to their sold out concerts around the world. Ambrosia achieved 5 Top 40 hit singles on Warner Bros. Records, released between 1975 and 1980, including “How Much I Feel” and “Biggest Part of Me”. In 2015 the group released a new single, “Hopes and Dreams”, which was featured on the series called The Sparrows that aired on the Fox television channel. As of 2017, the new Ambrosia material keeps coming.

John Ford Coley is an American singer, guitarist, classically trained pianist, actor, and author. He is most revered as half of the Grammy nominated duo, England Dan and John Ford Coley.

John has created many memorable hits such as: “Love Is The Answer”, “Gone Too Far”, “I’d Really Love To See You Tonight”, “We’ll Never Have To Say Goodbye Again”, “Nights Are Forever Without You”, and “Sad To Belong”.

Born in Dallas, Texas, John grew up listening to the Grand Ole Opry and early rock and roll music. He also grew up singing church hymns and learning to play classical piano. When he was just 16 years old, he and schoolmate Dan Seals, joined the group Theze Few. Later, the band became Southwest F.O.B. and toured the Texas music scene. They had one hit in 1969, “The Smell of Incense”, which hit number 43 on the charts – and soon the band got to play on stage with Led Zeppelin and other acts.

Later becoming England Dan & John Ford Coley, the duo was signed by A&M Records, and their first break came in 1972 with the song “Simone”. After three albums they were released from their contract with A&M only to acquire another record deal from Atlantic Records’ subsidiary Big Tree Records two years later. They released the song “I’d Really Love to See You Tonight” and had four top ten hits and two top-twenty hits. Nominated for a Grammy Award, they received triple-platinum and gold records and released eight albums before disbanding in 1980.

In 1999, he moved to Tennessee as he loved the Nashville music community. Today, he still loves music and performing on stages around the world. As part of the growing appreciation for smooth yacht rock music, John Ford Coley brings his Grammy winning style to the scene with love.