Danny Seraphine and CTA – May 12 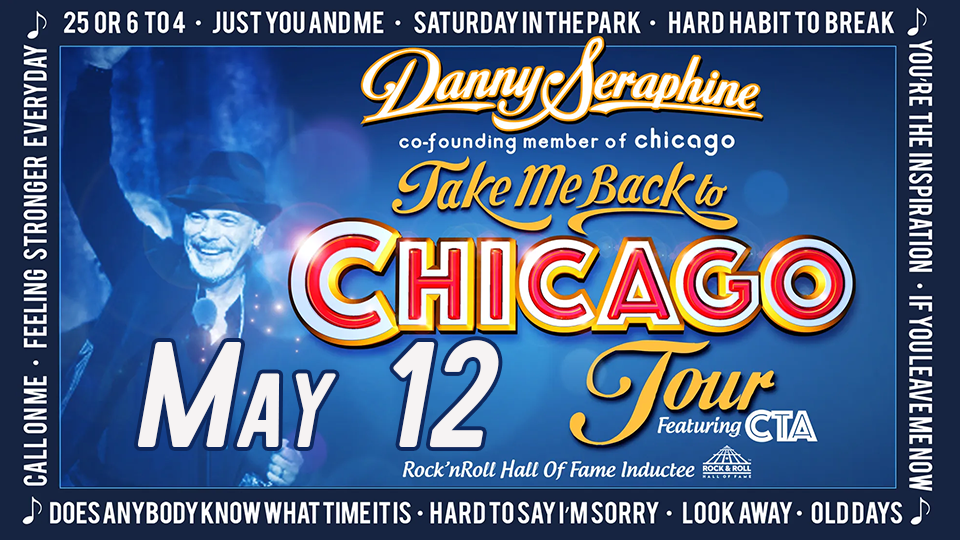 The Take Me Back to Chicago Tour

“Take Me Back to Chicago Tour”

Dynasty Entertainment LLC and Marion Cultural & Civic Center are proud to announce “The legendary music of Chicago comes alive starring Chicago co-founder and Rock & Roll Hall of Fame inductee Danny Seraphine. The CTA band and their powerful horn section, performs Chicago’s classic hits from the 70’s like 25 or 6 to 4, Feeling Stronger, and Saturday in the Park and also includes the 80’s power ballad era including Hard Habit to Break, You’re the Inspiration, and Look Away. It’s a night of nothing but classic hit music with Danny Seraphine’s, “Take Me Back To Chicago Tour.”

Drumming Legend  Danny Seraphine, is one of the world’s most highly-respected rock drummers. He was the drummer, percussionist and a founding member of the band Chicago. From 1967 to 1990, Seraphine played on and produced multiple Grammy Award winning records.

From the beginning, Danny Seraphine, as the drummer, was always the backbone of the operation. It was his job to keep everyone in time and on balance. He set the pace and carried it through to the end, no matter what. In 1990, after 23 years of performing, composing, and recording albums with Chicago, Seraphine experienced a jarring parting of ways with the bandmates that he considered brothers. The rift threw his life into chaos. Together they had toured the world and created one of the most enduring American songbooks of all time.

The iconic group that captured the hearts of millions of fans has earned 23 gold, 18 platinum, and 8 multi-platinum albums to date. They have had five number-one albums and 21 top-ten singles. On April 8, 2016 they were inducted into the Rock and Roll Hall of Fame at Barclay’s Center in New York.

In the end, it was a request to play a benefit show for a fellow drummer that pulled Seraphine out of seclusion and sparked a musical rebirth. That night, basking in the glow of a standing ovation, Seraphine realized how much he missed performing.

Founded in 2006, CTA (California Transit Authority) is led by co-founder and original Chicago drummer Danny Seraphine. Their music is rooted in new arrangements from the extensive Chicago catalogue. Often described as “Chicago on steroids,” Seraphine’s legendary drumming is at the core of CTA’s funk, jazz, and rock material supporting the searing guitars, blazing horns and impassioned vocals.