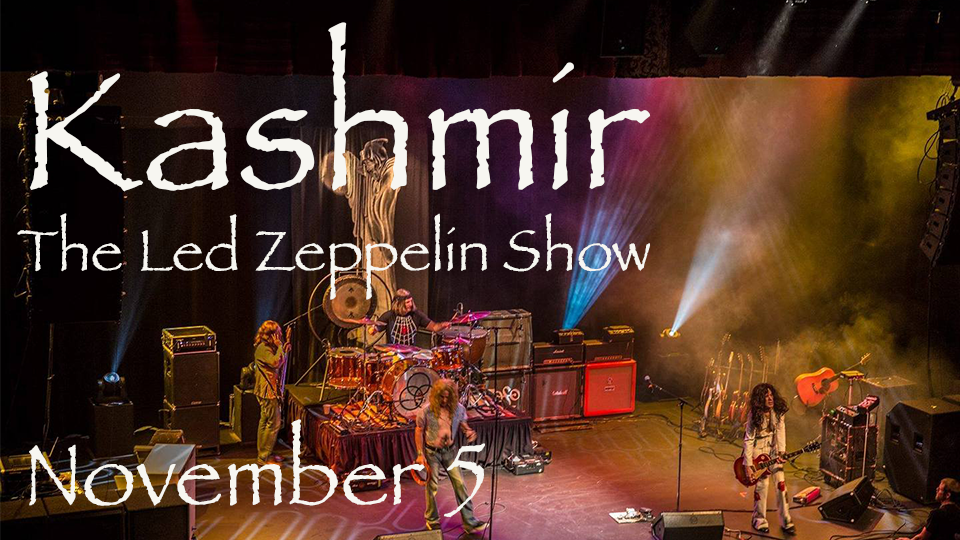 Kashmir – The Led Zeppelin Show, the nation’s most authentic representation of Led Zeppelin touring the country today is returning to the Marion Cultural & Civic Center this coming November 5th!

Kashmir – The Led Zeppelin Show had the city of Marion rocking in their last visit and this coming November will be no exception! The show features Jimmy Page who is no stranger to joining the fans in the audience; (we hope this year you will be able to witness and experience this closeness Jimmy has with his fans as strolls up and down the aisles), Robert Plant who embellishes the music with his undeniable persona, John Paul Jones adding just the right touch And John Bonham holding it “tight but loose”.

Kashmir – The Led Zeppelin Show is a seventies-era show with the music of hard rock pioneers Led Zeppelin.  Kashmir’s primary focus is capturing the live performance and raw energy of a Led Zeppelin show utilizing authentic vintage stage gear, costumes, and special effects, with great attention to detail in a non-pretentious way.

Everyone who loves Led Zeppelin wants to experience an authentic recreation concert; this is the show to see!

Featuring some of the greatest tunes of Led Zeppelin from “Stairway to Heaven”, “Kashmir”, “Whole Lotta Love”, “Black Dog”, “Immigrant Song”, “Dazed and Confused”, “No Quarter”, “When the Levee Breaks”, “Moby Dick”, “House of the Holy”, “D’yer Mak’er”, “The Song Remains the Same” and other great Zeppelin tunes.

Most importantly, Kashmir does not take liberties on improving the music. Led Zeppelin should be played as it was using only the equipment of the era, and should be reproduced dead on with great respect and admiration. “It’s not about us, it’s about Led Zeppelin”.

You will witness and experience an authentic recreation of a Led Zeppelin concert, featuring a Jimmy Page and Robert Plant tribute as close to the real thing as it comes. The show features Jimmy Page who was no stranger to joining the fans in the audience and you can experience this closeness he had with his fans.

Anyone who is a Led Zeppelin fan or knows a fan who they can share the gift of Led Zeppelin, or anyone who wants a wonderful family friendly night of exciting entertainment featuring the greatest tunes of Led Zeppelin.

Don’t miss this family friendly show and use this opportunity to share and introduce this wonderful music to your friends, children and grandchildren.

Let’s get the LED out, get your tickets now! You will not want to miss KASHMIR -The Led Zeppelin Show