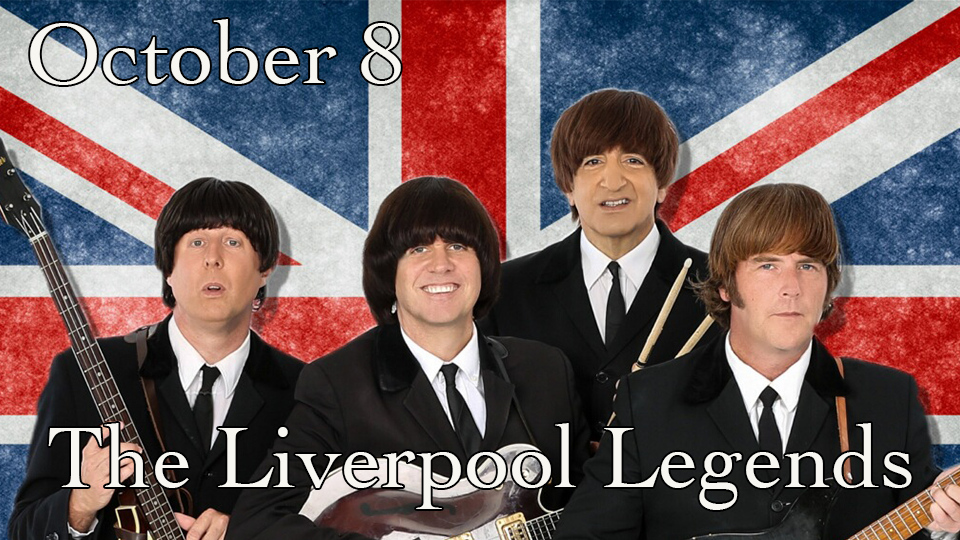 The Marion Cultural & Civic Center is re-opening and LIVE PERFORMANCES will resume and Dynasty Entertainment LLC is excited to be bringing The Liverpool Legends back to Marion!

The Liverpool Legends are “The Ultimate Beatles Experience” and the end of The Beatles era was never thought to be in sight when The Beatles played their last show on the roof of Apple Offices in 1969. Imagine what would have been if The Beatles continued their journey.

The Liverpool Legends will Come Together on stage at the Marion Cultural & Civic Center performing songs spanning the entire career from the days at the Cavern with “Please Please Me” to “Let it Be”. With precise attention to every musical detail, along with costume changes, vintage instruments and special effects, Liverpool Legends will bring back the sounds and feelings of the music that is special in the hearts to people all over the world, The Liverpool Legends will make you feel like you are watching listening to the real thing!

Share an evening an evening of music and romance listening to the Closest Thing to the Beatles you will ever hear.

Louise Harrison – sister of the late George Harrison of The Beatles who lived for over 50 years in nearby Benton, Illinois hand-picked these four incredibly talented musicians and actors to help form the Liverpool Legends who are the ONLY Beatles Tribute Band in the world with a close, direct biological link to the original Fab Four!

In the last 6 years, The Liverpool Legends have had sold out performances with over 18,000 people at Arena Ciudad De Mexico, as well as sold out performances in UK, India, Israel and Ecuador. In the spring of 2018 they played to 2 sellout shows in Mexico City, the sole act on the card! 23,000 fans screaming like this was 1963!

If you want to experience the best Beatles tribute show ever, you won’t want to miss

The Liverpool Legends – The Complete Beatle’s Experience on Friday October 8th at 7:30 P.M.!

Together, these four lads will bring you “The Complete Beatles Experience”

The Number #1 rated Beatles Tribute Show in the world today!