The Greatest Love of All – August 2 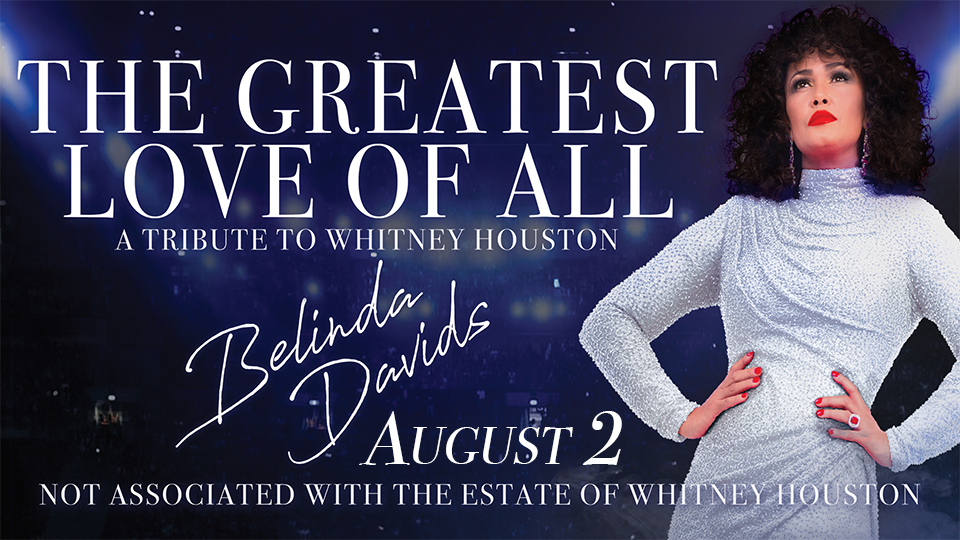 The Greatest Love of All

A Tribute to Whitney Houston

THE GREATEST LOVE OF ALL

Treat yourself to a memorable night of fun and nostalgia with this feel-good concert!

Great idea for your group night out – grab your family, friends, girlfriends, sports club or neighbours and enjoy all the memories that come along with a setlist of Houston’s greatest hits: I Will Always Love You’, ‘I Wanna Dance With Somebody’, ‘How Will I Know’, ‘One Moment in Time’, ‘I Have Nothing’, ‘Run to You’, ‘Didn’t We Almost Have It All’, ‘Greatest Love of All’, ‘I’m Every Woman’, ‘Queen of the Night’, ‘Exhale (Shoop Shoop)’, ‘Million Dollar Bill’ and mor.

Book now to secure the best seats in the house.

*Not associated with the Estate of Whitney Houston

Born 1976, Belinda Davids started life in the small coastal town of Port Elizabeth in South Africa, where her musical family of seven children spent much of its time in church, singing and surrounded by gospel music. Enduring youth as a ‘coloured’ girl in a difficult, apartheid-ridden South Africa, Belinda found solace and empowerment in music – it was an equalizer, of sorts, for someone so devoid of equality in her life and surroundings, an expression and a pastime that needed no resources, no special education, no permissions, just her own God-given voice.

Her talent was glaringly apparent from an early age. Still to this day she has never had vocal training and is blessed with a 4-octave vocal range, putting her in the company of such vocal luminaries as Minnie Riperton, Mariah Carey, Christina Aguilera and Freddie Mercury. She began performing professionally at just 14 years of age and became technically adept at many genres but her true love has always been R&B; her childhood inspirations included Aretha Franklin, Anita Baker, Chaka Khan, Donny Hathaway, Michael Jackson and of course the one artist who has had the biggest impact on her life – Whitney Houston.

Belinda’s introduction to her soon-to-be idol was the track ‘Hold Me’ which Houston recorded with Teddy Pendergrass, and which became one of the first LPs Belinda ever owned. She was innately drawn to Houston’s musical style which resonated with the same modest familial values and gospel influences that pervaded her own upbringing.

Belinda sang Whitney’s music at every chance: at family gatherings, talent competitions and to friends whilst playing on the street. Like many young girls at that time her bedroom walls were plastered with posters and magazine cut-outs of the icon. Whitney’s influence was so strong it inspired everything from Belinda’s dress sense to her hairstyles. She included Whitney songs in every set she performed. As a young adult she joined the club circuit and was constantly compared to her icon.

In the mid 90’s Belinda caught the eye of record executives at Tusk Records and they worked together on the eponymous original album Belinda Davids. Three of the songs on this album, which Belinda also wrote, were released as singles: ‘This I Swear’, ‘This Is My Life’ and ‘We Go Together’. The latter was number one on the RiSA charts in South Africa for six weeks.

Belinda promoted her album all over South Africa for a number of years at various hotels, clubs & cabarets. She was the opening act for many international artists when they visited South Africa including Michael Jackson’s History tour, The Manhattans, The Temptations and Peaches and Herbs.

Years after her debut album, Belinda decided to travel abroad to expand her music career, which took her to Dubai, London and Hong Kong to perform in major hotels and clubs. The influence of Whitney was still undeniable; during a performance at a hotel in Hong Kong the similarity was such that the audience stopped the concert and demanded she sing acapella to prove she wasn’t lip-syncing.

After many years on the road Belinda settled in Los Angeles in 2009 to focus on getting her solo career back on track. In L.A she collaborated with R&B singer and producer Sam Salter on a couple of solo tracks, but she was mostly in demand as a backing vocalist and worked for some of the biggest names in Pop and R&B at the time, including Keyshia Cole, Monica, Johnny Gill, Kelly Price and Keri Hilson. Her incredible voice, versatility and model-good looks saw her become highly sought-after in this field; she made appearances on The Jay Leno Show and The George Lopez Show and mixed in celebrity circles.

But Belinda eventually chose to put her career on hold and return to her homeland in 2011 to be with family and concentrate on raising her two sons.

Shortly after however, in 2013, fate knocked. John Van Grinsven, creator and producer of Showtime Australia’s The Greatest Love of All,was on his final round of global auditions to find a star for the new production and Belinda managed to nab a last-minute audition. What had once been a hindrance for her was now a blessing – Belinda beat almost 15,000 other hopefuls to take the marquee role.

Touring began almost immediately and demand has grown exponentially ever since. The show has now performed across much of the globe including the US, Canada, the UK, Ireland, Germany, Russia, Switzerland, Sweden, Norway, Denmark, Iceland, Lithuania, Israel, Australia, New Zealand, UAE, Singapore, the Philippines, Indonesia and South Africa.

In 2017 Belinda’s profile reached new heights when she won the BBC’s Even Better Than the Real Thing TV talent program, hosted by Paddy McGuinness, and later that year gave a rousing performance of ‘I Will Always Love You’ on Fox TV’s iconic, long-running talent show Showtime at the Apollo, hosted by Steve Harvey. Both performances continue to gather millions of views online.

In the UK in 2018, Belinda reached another milestone as a performer when she debuted a special orchestral concert series of The Greatest Love of All and sang accompanied by The National Philharmonic Concert Orchestra in some of the continent’s most iconic venues, including the Hammersmith Apollo.